Hot for This Weekend!

In case it wasn't clear from the last two posts - we've made a special purchase on that Penn 320GT2 reel and the Ugly Stik BWC/AO2201 and have set them up as a rod and reel combo - including mono line! All for only $149.99!

Normally, the reel alone would go for about $100, while the rod would set you back another $80. But, we secured a special deal on these - just in time for prime time for the ocean and bay fishing!

We've also put together some lighter weight outfits, and have a wide assortment of freshwater and saltwater spinning setups - ready to spool up and get you out for the big holiday weekend!
Posted by Jim @ WSS at 7:36 PM No comments:

Reel Half of the Combo 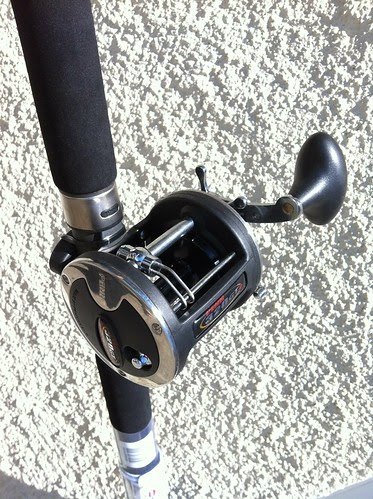 Reel Half of the Combo, originally uploaded by Western Sport Shop.

Penn 320gt2 levelwind reel. Excellent for salmon, halibut and striper. Matched with the rod and including mono line - only $149.99!

Rod Half of the Combo 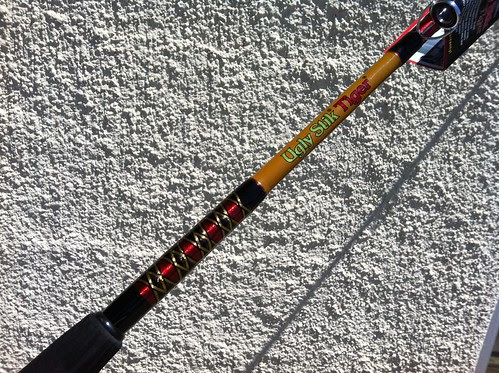 Rod Half of the Combo, originally uploaded by Western Sport Shop.

I just got off the phone with Sage, who let me know that they will be upgrading the Z-Axis "Single Hand" Series of rods for the upcoming season (2012 - yes, the tackle year rolls over waaay too early!). What that means is that for any Z-Axis that is not a Spey rod or Switch
rod, you can save 30% off the regular price if you say you saw it in the Email Newsletter! Do not wait - with a discount like that, you can be sure that people will be rushing down right now. (Sorry - no lay aways on these items - no "holds" either. Stock limited to rods on hand
and do not include Z-Axis Switch or Spey series rods.)

If you are more interested in conventional tackle, all Penn Spinfisher Series spinning reels are 20% off. These are geared towards saltwater applications, and have long been the standard by
which saltwater spinning reels are judged - strong drag, anodized spool and quality hardware.
Choose from the 550, 650, 750, 850 or 950 models - again - limited to stock on hand!

It's always great when the gift you give gets used every day. We all love the various styles
and engraving on the M-Clip money clips - trout patterns, fish engraving and a bunch of other features. You have to see this item to believe it - they took a look at your grandfather's money clip and said, "hey, let's do this RIGHT!" and came up with a tenacious spring, slide-out handles for better leverage and the artistic anodization. This is a very popular item, but it's one of those things that we realized we were overstocked on when we incorporated the Santa Rosa store inventory - our overstock is your savings - for an extremely limited time, you can get any model in stock for 50% OFF!

PLUS, our HUGE book sale is still going on!
Take 20% off any new book in stock and ALL used books are 50% off!

Throughout the store, you'll find special buys and bargains which will help you maximize your dollar this Father's Day - so don't delay and we'll see you at the shop!
Posted by Jim @ WSS at 1:51 PM No comments:

Halibut Right Under Your Feet! 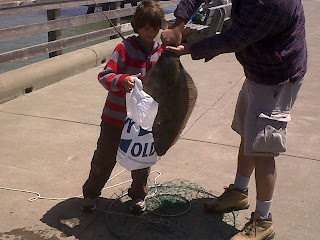 One of the great things for us is when customers come back and share stories and pictures of their successes - but it's even better when someone can't even wait to get back to the shop! Last weekend, we set up a father and son who were heading to the McGinness Pier. After watching everyone cast as far as they could, they decided to drop their bait down right into the pilings and - sure enough - almost immediately hooked up. It turned out to be a fiesty, 25# plus halibut!

Before they even left the pier, they called us up and then emailed the photo to share the good news!

So, before you go seeing how far you can cast, don't forget to look right under your feet!
Posted by Jim @ WSS at 1:44 PM No comments:

there are great bargains in every department - PLUS, our HUGE book sale is still going on! Take 20% off any new book in stock and ALL used books are 50% off!
Posted by Jim @ WSS at 3:57 PM No comments:

The Department of Fish and Game (DFG) announces changes to recreational
groundfish regulations that apply to state waters 0-3 nautical miles from
shore. The new regulations were adopted by the Fish and Game Commission last
month and take effect June 9, 2011. The changes conform to new federal
regulations implemented by National Oceanic and Atmospheric Administration
Fisheries last month, making all groundfish regulations consistent for state
and federal waters from 3 to 200 nautical miles from shore.

The new California regulations were developed over the past two years in
collaboration with fishery constituents after updated status information for
certain groundfish species became available. For some areas of the state,
the new stock assessment results combined with recent catch information
allowed for longer fishing seasons while still keeping projected catches
within allowable federal harvest limits.

The changes will apply to California recreational groundfish fishing
regulations for 2011-2012 statewide unless otherwise noted, and include the
following:

- A decrease of the lingcod minimum size limit from 24 to 22 inches
- An increase of the recreational bag limit of cabezon to three fish,
within the 10-fish combined bag limit for rockfish, cabezon and greenlings
- Removal of the lingcod fishery closure in December and January through
March when groundfish fishing is otherwise authorized
- An increase of the fishing depth constraint to 60 fathoms year-round for
California scorpionfish
- Modification to gear restrictions when fishing for cabezon and greenlings
so that no more than one line and two hooks may be used, consistent with
existing regulations for rockfish and lingcod
- Other modifications to improve clarity and organization

Cowcod Conservation Areas (offshore Southern California):
--For 2011 and 2012, open March 1 through December 31 in depths less than
120 feet (please note that nearshore rockfish continue to be the only
species of rockfish that may be taken in these areas).

Anglers are advised to check regulations before fishing for federally
managed groundfish. The upcoming recreational fishing regulations supplement
will contain all new 2011-2012 groundfish regulations. The regulations are
also available on the DFG website at www.dfg.ca.gov/marine/groundfishcentral
or anglers can call the Recreational Groundfish Hotline at (831) 649-2801.
Posted by Jim @ WSS at 1:22 PM No comments:

Sean D in the IJ! Sturgeon Crowd the Bay!

After these rains, the sturgeon rigs and sinkers have been jumping off the shelf at record pace - the odd weather patterns of the last couple weeks have kicked off a serious bite! 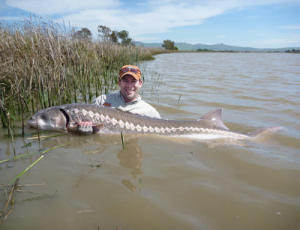 Sean Daugherty, a San Rafael fisherman, holds an 76-inch sturgeon. He hooked the fish during a recent expedition just outside of San Pablo Bay. 'People are catching a lot this year,' Daugherty said. The fish was over the legal limit, so Daugherty released it. (Provided by Sean Daugherty)

Thousands of the lumbering bottom-feeding fish seem to be gathered in the waters between the Carquinez Straits and the Tiburon Peninsula. Sport anglers, who are generally accustomed to long and tedious hours of fishing to catch just one sturgeon, are deeming 2011 one of the best fishing years in history.

But just why the white sturgeon — whose smaller and rarer cousin, the green sturgeon, is a threatened species — are swarming in San Pablo Bay more than elsewhere is uncertain. The season's intense precipitation almost certainly has something to do with the phenomenon. Fishermen generally associate heavy rainfall with increased sturgeon activity. Some anglers say the influx of fresh water into the bay stimulates the fish's appetite.

Whatever the reason for the bite, don't miss out! Get out and enjoy the action!
Posted by Jim @ WSS at 11:23 AM No comments: