From the California Department of Fish and Game News Release

The California Fish and Game Commission has adopted the following changes to sport fishing regulations. All take effect and will be enforced starting March 1, 2010.

Sturgeon Fishing Closure on Upper Sacramento River
There will a year-round closure to sturgeon fishing on the Sacramento River from the Keswick Dam (Shasta County, west of Redding) to the Hwy 162 Bridge (near Butte City). The use of wire leaders or any type of shrimp or lamprey bait is also prohibited in this area.

Spiny Lobster
Spiny lobster must be kept in a whole, measurable condition until it is being prepared for consumption. See Section 29.90(e).

Increased Bag and Possession Limits for Hatchery Trout and Steelhead
The statewide bag and possession limits were raised to two fish per day and four fish in possession. These increased limits will be in place for all rivers and streams where the take of hatchery trout or steelhead is presently allowed except for the Feather, Klamath and Mokelumne rivers. Refer to the Section 7.50 of the regulations for each individual reach.

Sunfish and Crappie Combined Bag Limit and Separate Tilapia Limit
The daily bag limit for sunfish is reduced to 25 fish and incorporated into a combined bag limit of 25 sunfish and crappie of all species, except as noted in Section 5.82. Tilapia are moved out of the sunfish bag limit and continue to have no limit on take.

Splittail and Lamprey Changes
Sacramento splittail may be taken only by angling, with a bag limit of two fish. The bag limit for lamprey is reduced to five and the use of traps is no longer allowed.

There are other changes to the sturgeon and steelhead report cards and general district regulations, so please review all of the 2010 regulations pertaining to the species you intend to pursue. Regulations are available on the Department of Fish and Game (DFG) Web site at www.dfg.ca.gov/about/fishing.
Posted by Jim @ WSS at 12:27 PM No comments: 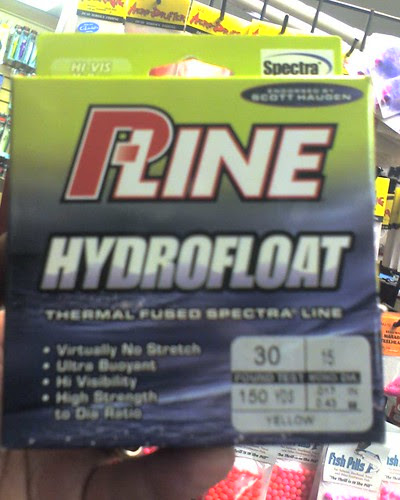 We've been stocking P-Line Hydrofloat line for a while now, and it's starting to catch on as a slick way to fish downstream baits and lures. It draws a bit from flyfishing - it's actually Spectra line which has a thin floating layer laminated to it. This causes the line to suspend on the surface. You can actually mend the line as you would with a regular fly line.

Rigging the line up with a slip-float lets you drift your bait along with the current in a much more natural fashion further downstream. Regular line will arc toward shore much more quickly, and many anglers feel that they have been getting more hookups with the fish that are just downstream of where regular monofilament has begun to move towards shore.

We have a number of good rod options to use for this - the staff favorites are an ultralight setup with a 10'6" Fenwick HMG Noodle rod or if you are looking for something a bit more traditional the Shimano Clarus 8'6" spinning setup.
Posted by Jim @ WSS at 2:21 PM No comments: