Flyfishing 101 course.
New dates in June and July - click here for a flyer. This popular introduction to fly fishing course fills up quickly - taught by fly department manager Carlo Bongio, this will get you casting effectively and teach the basics of fly tackle, knots and etymology. Perfect for the new or intermediate fly angler.

Bass/Panfish Warmwater flyfishing clinic
Sessions in July and August - click here for a flyer. Join Carlo Bongio at a private pond in Sonoma for an intermediate to advanced session focusing on the specific techniques for fishing for these dynamic species.

Other Clinics
As of the weekend, only a couple places left for the Kid's Flyfishing Weekend.

Bluewater/San Diego Fishing Seminar/Alan Tani Reel Repair Seminar
Mark your calendar for Saturday, July 16 - it will be a great day for learning about the electrifying fishing down in San Diego (and more about our 5 day trip this September), as well as an opportunity for you to get down and dirty - digging into your conventional fishing reels and learning how to clean and maintain them under the tutelage of reel repair icon Alan Tani - look for updates soon, but make sure you don't miss this day!

California Hunting Licenses, draw tags and bird validations have been available since last month - the new computerized system can be a little confusing, but we've been helping folks untangle their questions. The important date is coming up - the tag applications are due Thursday June 2nd.

These are now transmitted electronically through the DFG Automated License System. If you have not done so, you must bring in proof of Hunter's Safety (either a validated Hunter Safety card or previous Hunting License) in order to apply. If you are joining an existing hunting party, you will also need the ID number for that party. You will need to know exactly which zone you are applying for (or if you plan on applying for preference points). We have DFG Big Game information booklets and a larger scale map of zones at the shop.

Again - the deadline for drawing applications is Thursday, June 2nd.

(Please note - this is for lottery draw deer or other big game tags. If you are hunting in a non-lottery area, you may purchase tags up to the point the zone closes - pending availability of the tags).
Posted by Jim @ WSS at 10:54 AM No comments:

The return of a healthy sport fishing season is excellent news for anglers
and businesses in the region. For the last three years, salmon fishing has
been relatively nonexistent on the north coast due to fishery restrictions
designed to protect California salmon stocks and a lack of local salmon in
nearshore areas.

Field samplers with DFG's California Recreational Fisheries Survey program
contacted approximately 200 anglers fishing from private skiffs and
commercial passenger fishing vessels and checked almost 100 chinook salmon
landed during the opening weekend. Heads were collected from all adipose
fin-clipped salmon because the missing fin indicates that the salmon snout
was implanted with a microscopic, coded-wire tag that reveals the hatchery
of origin and other information important to California salmon management.

"This is a promising start to the salmon season," said Ed Roberts, DFG
associate marine biologist. "Weather hampered anglers on Sunday, but on
Saturday most boats landed a few legal fish and also released some
undersized fish."

Anglers reported that cold water conditions and scattered bait made locating
schools of salmon difficult. As the season proceeds, waters are expected to warm and
anglers will be better able to locate schools of bait and salmon. Spring
weather is notoriously difficult to predict while summer days normally bring
calmer seas.

Wardens checking anglers found good overall compliance with salmon
regulations. The most common violation continues to be the use of barbed
hooks while fishing for salmon. Anglers north of Point Conception are
reminded that they are required to use only barbless hooks while fishing for
salmon and that once a salmon is onboard their boat or other floating
device, all anglers must use barbless hooks, even if they switch to bottom
fishing.
Posted by Jim @ WSS at 10:50 AM No comments: 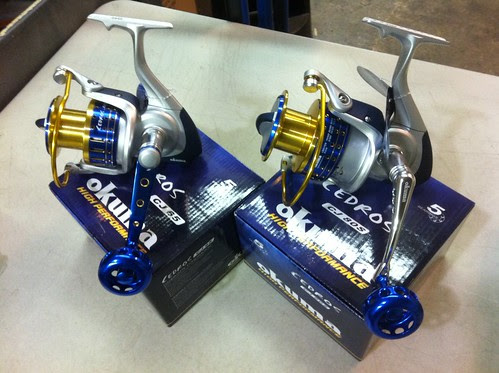 First look! The much anticipated arrival of the new Okuma Cedros spinning reels. CJ65 on the left, CJ80S (high speed) on the right. Saltwater ready. Seriously light. 30+ pounds of drag. Now in stock with more on the way.

Due to a delay in the federal rulemaking process, the California Fish and
Game Commission was unable to conform state recreational groundfish
regulations in a timely manner. New federal regulations now result in a
conflict between state and federal regulations for recreational groundfish
fishing, so that some rules differ for state (0 to 3 nautical miles from
shore) and federal waters (3-200 nautical miles from shore) off the
California coast beginning Wednesday, May 11, 2011.

New actual conflict arises on Saturday, May 14, 2011:
4. Season opening date in the Northern and Mendocino Groundfish Management
Areas (from the California/Oregon border south to Pt. Arena) - State
regulations will continue to be in effect, opening the fishery in these
areas on Sunday, May 15.

New actual conflict arises on Wednesday, June 1, 2011:
5. Season opening date in the San Francisco Area (from Pt. Arena to Pigeon
Pt.) - State regulations will continue to be in effect, opening the fishery
in these areas on June 13.

DFG will provide information to the public on its website as soon as the
Commission takes action and new state groundfish fishing regulations become
effective.