Just in case you didn't see the ad in the Santa Rosa Press Democrat this week - here's a copy: 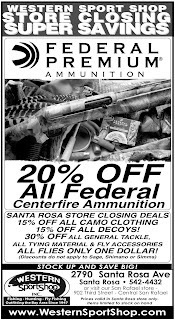 You can click on it to see the current deals to be found at our Santa Rosa Store Closing Sale. Here are the highlights:

Plus, here are a few special deals for the readers of this blog:
20% OFF all optics (binoculars, scopes, spotting scopes & shooting glasses), rings and bases
15% OFF all Hunting Waders
20% OFF all New Books in stock
50% OFF all Used Books in stock

Please note - Sale items are strictly limited to stock on hand. Sales items limited to Santa Rosa store only unless specifically stated otherwise. No layaways or partial payments on sale items. All items sold "as-is". No exchanges or returns on sale items.
Posted by Jim @ WSS at 12:24 PM No comments:

Carlo Hauls Up a Hawg 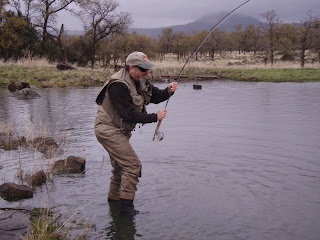 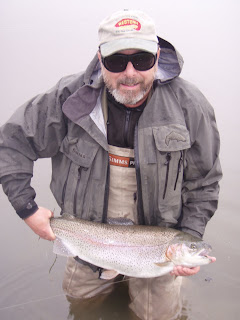 At this point, we are looking to do a stillwater clinic at Eagle Canyon Lakes in either late February or March. If you are interested, please call Carlo at the Santa Rosa store 707-542-4432, or email customerservice@westernsportshop.com
Posted by Jim @ WSS at 12:09 PM No comments: 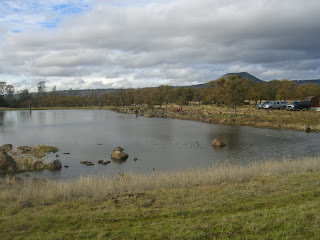 Not to be outdone by the salmon and steelhead contingent, Western Sport Shop staff members Jerry Warren and Carlo Bongio headed north to evaluate conditions at one of the more amazing fisheries we've heard of - the Trophy Trout Lake at Eagle Canyon. We've rarely seen Carlo and Jerry actually worn out by a day of catching trout, but when we saw the photos, we understood why - 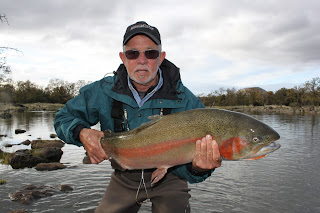 Just to be clear, Jerry is holding a TROUT!

This lake can be fished either from the bank or via a float tube. It is open through the winter and closes for the summer at the beginning of April. This unique, spring-fed fishery has some of the most monster fish we've ever seen.

Right now, Carlo is working to set a date for a "Monster Trout" clinic - check back here for updates as soon as we firm up the specifics. In the meantime, here is another of the many fish they caught: 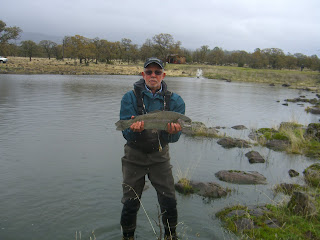 Just one more quick image to show the nicely oversized drag knob and excellent inletting on the frame to reduce weight.
-- Now in stock! We've been waiting for these lightweight, large arbor, disc drag reels since they were announced a few months back. These worthy replacements for the CD-L series are an exceptional value in saltwater reels. Perfect for the bay and delta!

The new 2011 California Fishing Licenses are now available for sale in both of our stores. With the new license year comes a big change - fishing and hunting licenses are now issued using a computerized system. This is a project which has been developed over the past few years, and it is now in effect for California.

The beauty of the system is that once your information has been entered, we won't have to re-enter your info when you come back to get a steelhead report card, or come in to purchase your hunting license (though hunter safety evidence is still required).

We've had the terminals in place since last week, and have been shaking the bugs out of the system while getting our staff trained on the new method. While it actually simplifies a lot of the paperwork and makes things more efficient, there are a few things you should know about before you head down to purchase a license.

If you are buying a license for yourself, it's simple: just bring in your California Driver's License or Identification Card. We can swipe the magnetic strip and transfer your information into the DFG database, then issue the license. If you don't have a California Driver's License or ID card, you can bring down a passport, green card, birth certificate or other form of photo identification.

If you are buying a license for someone else: You will need to know the name, birthday and driver's license/ID number for that person, in addition to address and personal information (height, weight, eye and hair color). We can not issue a license without full identifying information.

If you don't have that information, there is another option - you can purchase a "Voucher" for a 2011 Resident Sport Fishing License. This is a "prepaid" Voucher which lets them go into any California License Agent and redeem it for a 2011 Resident Sport Fishing License. (Vouchers are transferable, so if you receive two Vouchers, a friend or relative could redeem it for their license.)

Please Note - the Voucher is not a valid fishing license. If you are caught fishing with a Voucher rather than a license, you will be cited. Vouchers may not be redeemed for anything other than a 2011 California Resident Sport Fishing License.

License sales actually take a little less time than previously, but because we now must complete the information through the DFG-issued terminals, there will be times when people are waiting their turn. We appreciate your patience on this, and encourage you to head down to the stores at less busy times to obtain your California Licenses.

Please note:
California Hunting and Fishing licenses and Vouchers are non-refundable. Any claim for refund due to duplication or incorrect purchase of licenses must be made through the Department of Fish and Game License Branch in Sacramento.
Posted by Jim @ WSS at 11:35 AM No comments:

Western Sport Shop Operations Manager Tom N. headed up to the Smith river a week ago, and between the recent storms managed to get three nice salmon - The only day they could fish was Sunday due to rain and high water.

Here, Tom shows off the the 28 pounder he landed: 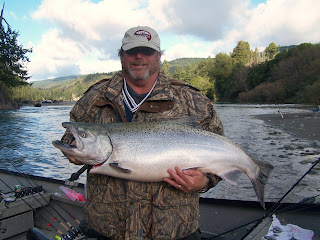 His friend and fishing partner Kenny landed the big fish of the day - a fresh 35 pounder! 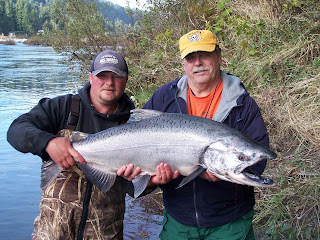 Beautiful bright fish in cold and challenging conditions!
Posted by Jim @ WSS at 11:24 AM No comments:

The Department of Fish and Game (DFG) will close the commercial fishery
for market squid, Loligo (Doryteuthis) opalescens, Friday, Dec. 17 at
noon.

Based on landings information and projections, DFG biologists expect
that by Dec.17, the seasons harvest limit of 118,000 short tons of
market squid will be reached. The squid fishing season runs from April
through the following March of each year, which means the fishery will
now remain closed through March 31, 2011. This is the first time that
the harvest limit has been reached since it was implemented by the Fish
and Game Commission in 2002.

"We have had a banner year for market squid this year," said Dale
Sweetnam, a DFG senior marine biologist who oversees the commercial
market squid fishery. "In California, we have had squid landings from La
Jolla to Half Moon Bay and reports that market squid are abundant off
many of the offshore banks, the Channel Islands, as well as off Baja
California. The colder than normal water conditions we have observed
since February have provided optimal conditions for squid spawning."

The presence of market squid is strongly correlated with environmental
factors, such as water temperature and nutrient availability. In warm
water years and during El Niño conditions, squid become scarce and
landings decline. However, when water temperatures cool, even after
severe warm water events, market squid numbers can rebound quickly and
dramatically.

DFG, with assistance from squid fishermen and seafood processors, has
been tracking catches daily this fall in anticipation of reaching the
harvest limit, which was established to ensure the squid fishery does
not expand beyond levels experienced in the 1990s. "The wetfish industry
and California Wetfish Producers Association are very pleased to partner
with DFG to ensure a sustainable market squid resource and fishery,"
said California Wetfish Producers Association Executive Director Diane
Pleschner-Steele.

The harvest limit is one of many provisions governing the squid
fishery, which has been managed under the states Market Squid Fishery
Management Plan (MSFMP) since 2005. The goals of the MSFMP are to ensure
long term conservation and sustainability of the market squid resource,
reduce the potential for overfishing and provide a framework for
management. In addition to the harvest limit, weekend closures were
implemented to allow for periods of uninterrupted spawning each week.

The MSFMP was developed under the provisions set forth by California's
Marine Life Management Act (MLMA), which became law in 1999. The MLMA
created state policies, goals and objectives to govern the conservation,
sustainable use and restoration of California's living marine resources,
including squid.

The California groundfish regulations for 2011-12 recently adopted by the
Fish and Game Commission will not be ready for implementation on Jan. 1,
2011 as planned. These regulations conform to federal regulations adopted by
the Pacific Fishery Management Council (PFMC). However, due to procedural
difficulties encountered within the federal rule making process, the 2010
regulations will remain in place until further notice.

"We are working closely with our federal fishery management partners to
establish an implementation date," said Department of Fish and Game (DFG)
Marine Region Manager Marija Vojkovich. "We will announce the effective date
for the new regulations as soon as it has been established. Until then, we
ask that fishermen continue to follow the 2010 rules."

The new California regulations were developed in collaboration with fishery
constituents, other Pacific states, PFMC and the National Marine Fisheries
Service over the past 18 months.

The public can still comment on the proposed federal groundfish regulation
changes on or before Jan. 4, 2011. Instructions for submitting public
comments can be found at
http://www.nwr.noaa.gov/Publications/FR-Notices/2010/loader.cfm?csModule=sec
urity/getfile&pageid=48404 (this page may be slow to load). The proposed
recreational changes can be found on pages 67894 through 67896.